The History of the Martini in Film & TV

The martini is a truly classic cocktail. Not only has it been around for more than a century, it has a classic feel to it. We associate the drink with a certain level of class and sophistication, especially when it comes to the glamour of Old Hollywood...or the intrigue of James Bond. 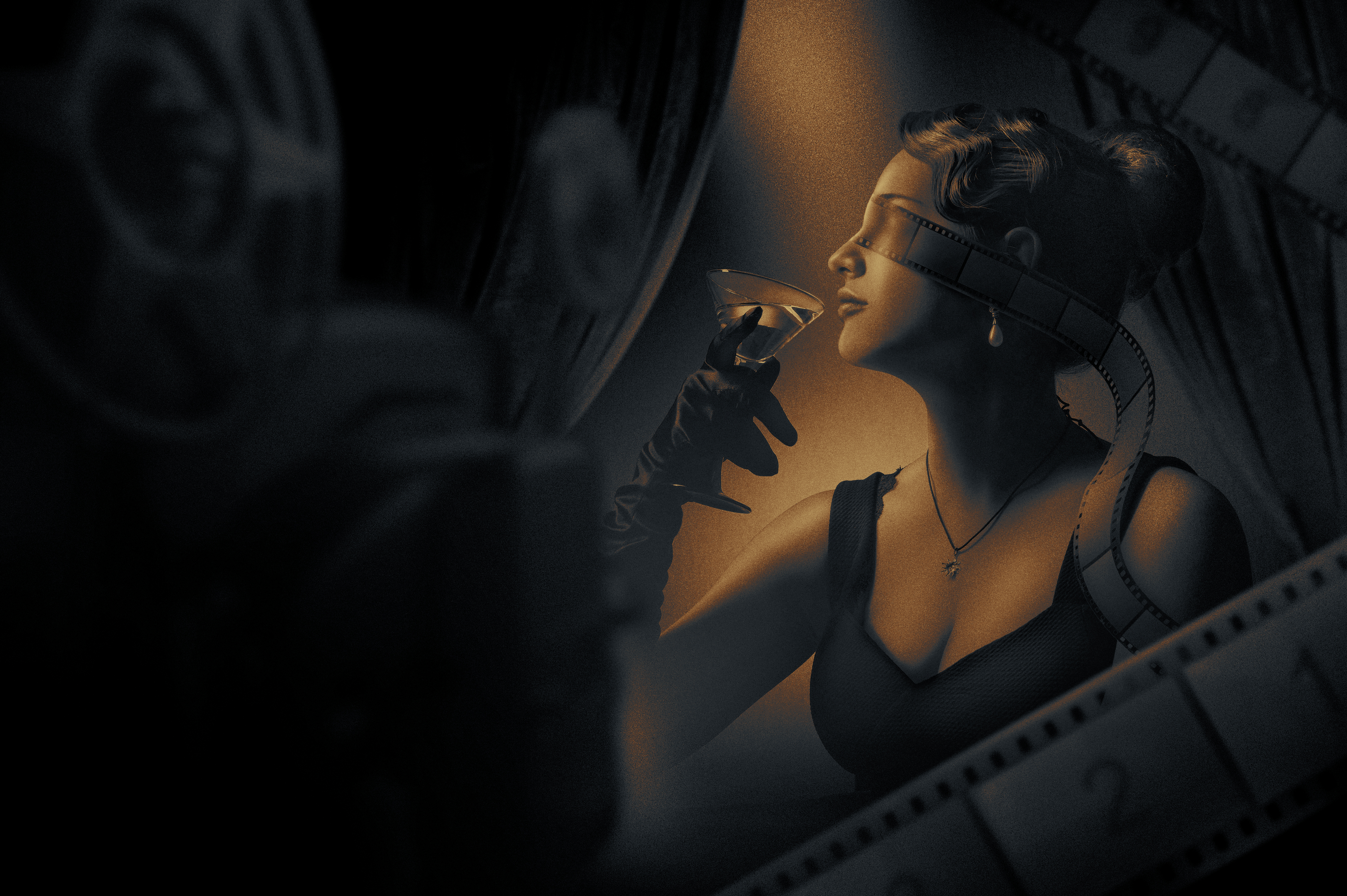 But where did the martini get started? Well, that can be hard to pin down for sure. Some claim it originated in the town of Martinez, California: a creation for a miner who recently struck it big during the Gold Rush. Others claim the drink debuted on the East Coast, at New York’s Knickerbocker Hotel. And some say it began simply as an abbreviation of “Martini & Rossi” vermouth, a brand created in the mid-1800s. What we do know for sure is the cocktail found its way into the Bartender’s Manual in the 1880s, and has been a bar staple ever since.

Though the martini has remained culturally relevant for more than 100 years, it was especially popular in the 1950s and 60s. As we take a tour through martinis in media, you’ll notice many of its biggest appearances in film and TV occurred during those decades. (Or, in newer media emulating the 50s and 60s.)

From James Bond to The Queen’s Gambit, let’s look at some of the films and TV shows over the years that put the martini in the spotlight.

A classic film kicks off our martini media list. All About Eve premiered in 1950, no doubt helping launch the martini’s soon-to-be-widespread popularity. In the film, Bette Davis’ Margo is seen drinking a martini. Specifically, she favors a Gibson – a variety made with gin and vermouth like a classic martini, but garnished with a pickled onion instead of an olive.

The cocktail gets name dropped in the film itself, as Celeste Holm’s Karen is described as “a Gibson girl” upon accepting her drink. Meanwhile, Margo famously downs her first Gibson in one before announcing, “Fasten your seatbelts. It’s going to be a bumpy night!” (Then she heads upstairs and immediately grabs another Gibson from a server.)

One of Alfred Hitchcock’s biggest thrillers, North by Northwest, also prominently features a Gibson martini. After boarding the 20th Century Limited train, Cary Grant's Roger Thornhill sits down in the dining car to eat with Eve (Eva Marie Saint). He orders a Gibson martini ahead of his meal.

You can’t talk about martinis in film without talking about James Bond.

Ian Fleming, author of the original James Bond books, debuted the spy’s iconic “shaken, not stirred” line in his 1958 novel, Dr. No. The feature adaptation sees the story’s villain utter the line, but it’s not until two years later in Goldfinger that Sean Connery’s Bond first delivers the catchphrase.

Most bartenders will tell you that shaking a martini really isn’t the ideal way to prepare the cocktail. (It waters down the drink.) But Bond’s confident and suave delivery of the drink order stuck with viewers – to the point where even those of us who have never ordered a martini (or even watched a Bond film) know how the spy enjoys his drink.

Karen Walker (Megan Mullally) frequently had a drink in hand in Will & Grace – during the show’s initial run and the reboot. And Karen’s drink of choice was a martini. As she likes to say, “Somebody’s gotta be the designated drinker!”

Another sitcom queen, Lucille Bluth (Jessica Walter), loves a good drink. When she’s not enjoying a “breakfast vodka” (vodka rocks, with a piece of toast), you could often find her enjoying a vodka martini, garnished with a few olives.

We’re not going to add every time James Bond ordered a martini to this list. (Just think of how many Bond films there are.) But the Vesper martini, a Fleming invention for the character, deserves a special mention.

Fleming outlines the recipe for a Vesper martini in his novel Casino Royale, first published in 1953: three measures of Gordon's, one of vodka, and half a measure of Kina Lillet, shaken, with a lemon twist. The drink gets its name from Vesper Lynd, the fictional double agent portrayed by Eva Green in the film.

While Don Draper is an Old Fashioned kind of guy, his counterpart Roger Sterling (John Slattery) favors vodka over whiskey. He usually drinks it neat, but when taking dinners with clients you’ll catch him discussing business over a vodka martini, garnished with an olive.

The martini’s reputation as a sophisticated drink comes to play in one of media’s most lavish parties. F. Scott Fitzgerald’s enigmatic Jay Gatsby personally favors a Gin Rickey. But that gin flows free at Gatsby’s mansion, and many of his party guests are partial to a martini. You can see revelers enjoying a classic martini with olive garnish in The Great Gatsby (2013).

After its spike in popularity during films of the ‘50s, Netflix’s hit series The Queen’s Gambit brought back the Gibson Martini. Anya Taylor-Joy plays a chess prodigy with a penchant for pills and liquor – and her poison of choice? The Gibson.

Okay, so this one isn’t exactly a martini. But in Breakfast at Tiffany’s, Audrey Hepburn’s Holly Golightly drinks a cocktail dubbed a “White Angel.” She orders “half vodka, half gin, no vermouth,” which is shaken over ice and then strained into a martini glass.


In the mood for a martini?

Has this list put you in the mood for a martini of your own? Dive into our classic recipe below, or try one of our favorite variations: the Amelia Martini. 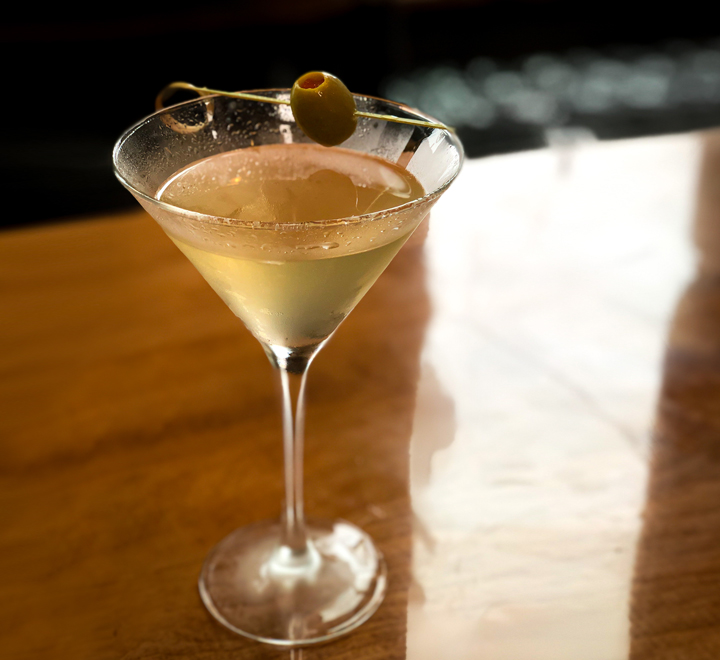 
Rinse Glass with Dry Vermouth. Shake vigorously in mixing tin with ice and strain into a martini glass. Garnish with a single olive. Serve up high and dry with that little bit of salty like Amelia Earheart